Right.  This is going to be a long one so get comfy…might need to get the slippers on and the tea made before you go any further. I’ve been thinking. Thinking a lot.  Had a weekend off from writing to visit the old stomping ground and catch up with old friends (we might be getting on in years but having the mentality of immature teenagers goes a long way to keeping you young!).  And with no physical outlet for my thoughts, they have been running around my head like small children high as bejaysus on fanta and fizzy cola bottles. And here’s what I’ve been thinking about (now concentrate cos this could get messy!).

When I joined the MA in Writing, during our very first session we were asked what kind of writer we wanted to be.  What books did we like and what writers inspired us. I sank further into my chair, sweating for fear of being discovered as a fraud, as people talked about the classics like Hemingway, Scott, Milton and other more contemporary writers that I had never heard of.  Now don’t get me wrong, I read.  I read all the time and have done so as far back as I can remember.  But I am a book slut.  I flit from one genre to the other, like a brazen hussy, never willing to commit to anyone in particular.  Half of the time I don’t remember the names of the authors I have read….but I always remember the title and how the book made me feel. So this weekend I began to think about the writers who have shaped me.  And here is my theory.  I am the love child of Stephen King, JK Rowling and Marian Keyes (no don’t go…I can explain!)  If in some parallel universe these three writers ended up in bed together, in a West of Ireland B&B, in the honeymoon suite (which in fairness only costs more because there is a lovely brown bedspread covering the beige sheets, and the floral wallpaper is only new, having been put up 15 years before by the owners sister’s husband’s father-in-law, who knows a thing or two about wallpapering I’ll have you know) after a major bender involving copious amounts of strong alcohol and hard drugs, I would be the result of their lustful evening.  Now stay with me….I didn’t say this would be easy!

Why these three writers? Well I’ll tell you…Stephen King was all I read in my teenage years. I read and re-read every book that he wrote and loved the darkness of it.  Loved that safe, scared feeling that I got reading his books – safe at home having the living feck scared out of me.  His words had bite.  Everything he wrote I could see, smell, feel.  I still wonder how I ever held down a babysitting job.  The parents would arrive home to the lights dimmed with an episode of The Twilight Zone on the TV and a copy of The Stand clutched in the hand of their freaked out looking babysitter.  I actually remember once being too afraid to go upstair and check the children for fear that It would get me (They were fine by the way – survived the night and are now well rounded adults).

Then when I got older and had my first child and he came to an age when I could read proper books to him, I obviously couldn’t send him to bed with the soothing words of The Dark Half buzzing around his head. Thankfully JK Rowling had just released the first of the Harry Potter books.  The first few books I read to him, a little each night but, as he got older we would buy two copies and a reading competition would ensue to see who could finish it first and spoil it for the other.  For about ten years he grew and I aged to the magical theme song of Harry Potter playing in the background.

And now, when I sit and look at the book I’m writing at the moment I realise that I have moved into my Marian Keyes phase. No longer afraid to be classed as a chick lit writer (something that I feared the most when starting out).  I am what I am.  A woman, writing about the experiences, fears and hopes of women, for women to read (and men too, but they probably won’t admit to it).  They say write what you know and I know how to be a woman (would say lady but that would be a huge stretch of the imagination).  And while the book I am writing travels to Alaska and the Basque country – places I have never been and know next to nothing about, I can still write about these places because the woman in my book is going there and I know about her.

And there you have it.  I am a normal housewife, with a serious streak of blood curdling horror in my heart, who still believes in magic and wizards. Not in any way fucked up and confused.  So move along now, nothing to see here. Nothing to worry about.

(Little pic below of what I really look like….see it all makes sense now doesn’t it…woman, mommy, horror, make believe…:) ). 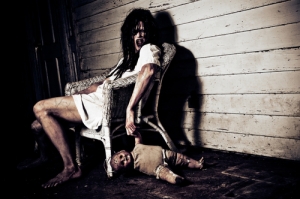 2 thoughts on “The love child of King, Rowling and Keyes.”

The Road to Hell is Paved with Adverbs

The Road to Hell is Paved with Adverbs